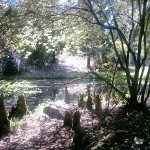 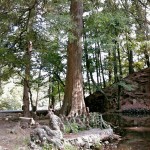 Leaving Nashville, I navigated through Chattanooga, TN down to Rome, Georgia.
I had already visited Rome, New York, the town of my earthly beginning.

Though both towns are small in stature and population, each had its own charm and treasures.

I didn’t plan to go to Rome, New York.
I was on my way to visit my Grandmother en route to a show in Western New York.  Instead of taking I-86, I drove I-87, a tollway with few exits.  I ended up far North from where I had intended and decided to keep going.  I had friends celebrating their wedding in Rochester, and I might have made it on time.  On the way there, I noticed signs for Rome.
And I decided to at least pass through this place of my birth.

Seeing it for the first cognizant time this Summer was a contemplative experience.
I wondered about humans, if we, like salmon, will find our way to the place of our birth.
Salmon reproduce there.  I did none of the such.
But, I wondered about the climate, landscape, atmosphere, culture.  I wondered if I belonged here.
Though I would have liked to, I did not stay long enough to find out.

Nearly a month later on tour, I arrived in Rome, Georgia.  The people were kind, welcoming, and supportive.
I went to the Rome history museum and saw old pianos, guns, medical instruments, photos, maps, and clothing.  It was again a reminder of the stories others have lived in the South: inhuman horror juxtaposed with wealthy leisure, struggles and celebrations, abundance and scarcity.  I am grateful for the chance to remember and consider.
A restaurant server at the Harvest Moon Cafe told the cook I was from Portland.  He came to the table and paraphrased a Portlandia skit about the background of my food.  People.  And I’m only half way.

I was shown excellent hospitality in Nashville, Tennessee.  Chris Hayzlett hosted a great house show with Rihenna Downey, Jasmine Commerce, Beards, and I.  People responded well and it was an enjoyable night.  Rachel, Tyler, and Beth invited me to rest at their house and eat their array of ice creams and hummus dips.  And, the next day, while running errands, I was taken to…The Parthenon.  Well, Nashville’s replica.  Here, you can see me imagining what it would be like to push over the pillars and collapse the might stone structure.  It didn’t happen.  Instead I had a great time, then went on an awesome bike ride with Nathan Conrad aka Spoken Nerd, eventually getting more exotic and delicious ice creams from Rachel’s ice cream shop.  I was grateful. 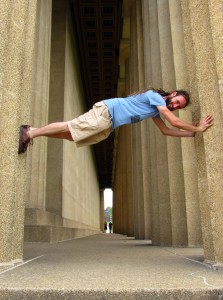 Feeling love from strangers made friends

I feel loved.
A stranger told me the most amazing compliment.  Now he is a friend.

A stranger made me dinner.  Now he is a friend.  Now, I know his name.

A stranger called me white Jesus in his comedy routine.  We exchanged the shaking of hands.  Now, I know his name.

A stranger  told me he wants me around every week, that my poetry is money, that he would pay to transport me back.  I respect him.  I am honored.  I feel loved.

The crowds don’t expect spoken word or slam poetry.  Many have never experienced it before.

In 2003/2004, south of Dallas, TX, Kim Sasser opened her mouth and poetry came out.  That was the first time I heard a spoken word poem.  Amazed, I knew it was something I wanted to cultivate (it sounded like my insides).

Last night, in East PA, several people felt something, heard something, felt awakened, told me about it, reminded me that there are multitudes waiting for the tools, the words, emotions–to get out what is trapped within.  They told me it came out.